SymfonyCloud leverages the SSH protocol to access running containers and Git over SSH for project deployments.

They are four possible reasons to why you might encounter this error:

This issue usually happens only on Windows

As for SSH authentication, on Windows, SymfonyCloud uses both PuTTY and OpenSSH directories for SSH host key verification, but symfony deploy is based on Git which is not using the same process. If you encounter this error message you can use git ls-remote test@git.eu.s5y.io:test.git to trigger a new connection and force Git to register the key.

SymfonyCloud leverages the SSH protocol to access running containers and Git over SSH for project deployments and might have to read your SSH keys to do so.

This error can happen in a very specific situation if the two following conditions are met:

This use case is not yet supported by the upstream library we use. In the meantime you have two solutions:

DSA keys are considered insecure and ECDSA security assessment depends on your computer ability to generate good random numbers. So alternatively to the two solutions mentioned before, you can also migrate to the Ed25519 algorithm but keep in mind this might require quite some work from you as you will end up with a new public key to deploy everywhere.

Environment variable not found (during the build step)¶

It might happen that an application build breaks because of an environment variable that does not exist:

This usually happens with applications migrated from Symfony pre 3.2 to 3.2 and upper. When migrating, one needs not to forget to define defaults in the .env file or in the service container configuration:

Symfony applications created before November 2018 had a slightly different system, involving a .env.dist file. For information about upgrading, see: Nov 2018 Changes to .env & How to Update.

This error message is usually due to a known Doctrine bug/limitation.

Some parts of Doctrine configuration (such as Entities metadata build) need to know the exact database version to be built. This is usually done during Symfony cache warmup for more efficiency but this requires the database to be available, which is not is the case on SymfonyCloud.

One can reproduce this issue locally by shutting down their database and try clearing Symfony cache.

The best long-term solution to this problem is to make sure no connection to the database is done during Symfony cache warmup. However, this solution might require to fix some third-party code or not be possible at all.

In this case, the best workaround to date is to explicitly tell Doctrine which database platform and version the application is going to use. This can be done either by updating the default DATABASE_URL in the .env file by appending ?serverVersion= and the targeted version or by updating the Doctrine semantic configuration under the keys driver and server_version:

Don’t forget to keep this value in sync with the version configured in .symfony/services.yaml.

This error message comes from your application and is generated by the default Symfony’s error template.

If your application works locally but you see this message on SymfonyCloud it usually means you have a configuraton error or missing a dependency.

To fix this issue you have to inspect application logs, the cause of the error is usually specified in the error message:

The server returned a “404 Not Found”¶

New Symfony applications comes without controllers by default. This means there’s no page to show as a homepage. When running your project locally you should have been welcomed with this page: 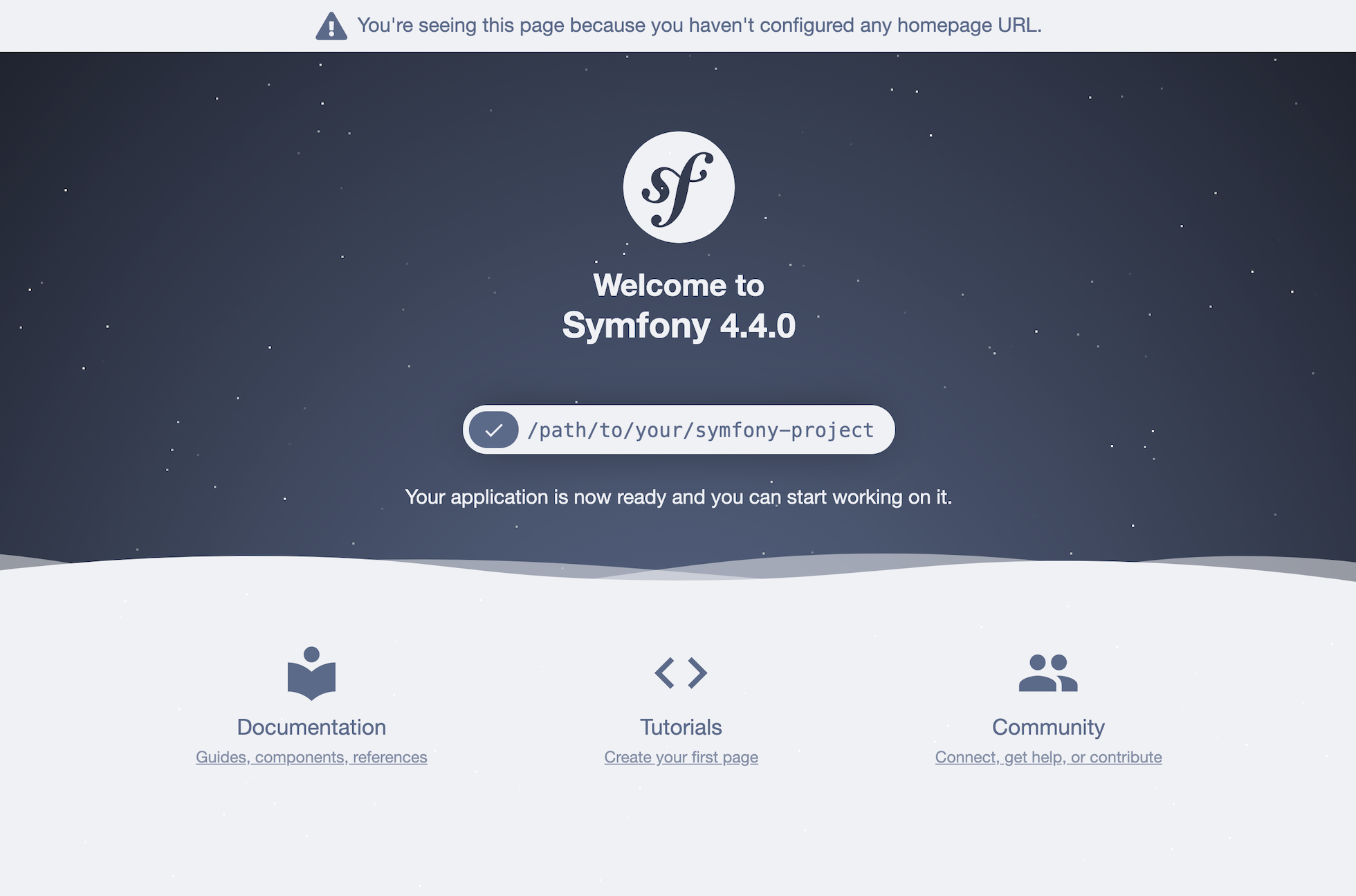 But with this page when running on SymfonyCloud:

This is because SymfonyCloud runs in production mode and as such Symfony shown a generic 404 error. To fix this, you will have to create your first Symfony page.

If you already created a custom page, check that all your files are commited, that you ran symfony deploy and it succeeded.

I want to rename the default (master) branch¶

Being able to rename the default branch on SymfonyCloud has many technical implications on the infrastructure that makes impossible for us to support this use case at the moment. Work is currently in progress to support this in the future.

In the meantime, one can work with another name locally by using the following procedure (we will assume the default Git branch is named main):

This technic is not compatible with Integrations such as GitHub or Gitlab as branch names are directly mapped to environment names.