The Symfony Core Team is back

Symfony project is developed by a large group of code contributors and documentation contributors. Some of these contributors have gained a lot of respect from the community due to their activity and commitment to the project.

Fabien Potencier, the leader of the Symfony project, announced during his keynote at the recent Symfony Live Paris 2014 conference the creation of the Symfony Core Team. This team not only intends to recognize and reward the great contribution made by these developers, but it will also be the foundation for the brand-new Symfony development workflow: 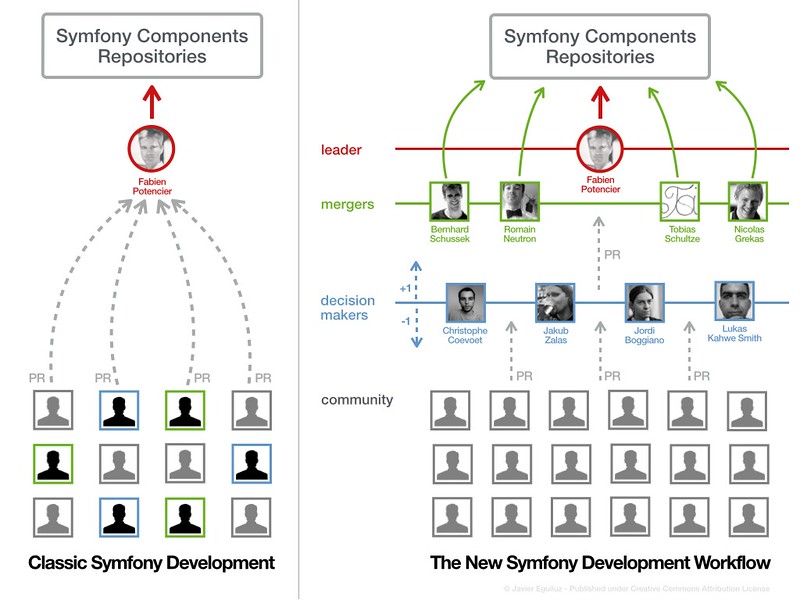 The first important change is that a selected group of Symfony developers have been granted access to commit directly to some Symfony repositories. This group, called mergers, is initially composed of:

In addition, to accelerate the development of new features, another selected group of developers have been granted the privilege of accepting/rejecting the pull requests submitted by the community. This group, called deciders, is initially composed of:

From now on, a pull request will need at least two +1 votes from deciders and mergers before merging it into the Symfony repositories. Also, pull requests with at least one -1 vote from these core members won't be merged. The pull request #3777 contains the document explaining all the details about the merging and voting policies.

Does this mean that community opinions won't be taken into account and that most pull requests will be rejected without reconsideration? Absolutely not! First, all -1 votes must always be justified by technical and objective reasons. Moreover, core members can change their votes during the course of a pull request discussion after listening to the community arguments. Lastly, most rejected pull requests can be reconsidered again after making the requested changes.

We strongly believe that the new Symfony Core Team and the new workflow will allow us to accelerate Symfony development while maintaining the quality and the vision of the project. However, we'd love to hear you opinions and comments about these changes.

By visions like this, symfony is a great web application reference today, and I think that will keep itself for a long tomorrow!

#5
This is great news and it shows that the Symfony community is reaching a good level of maturity.

I do think that the core team should include some of the documentation team, or at least Ryan Weaver. He has been doing an amazing job and should be recognized. Hopefully this can be considered.

#6
@Pablo The primary goal of creating the core team is not to reward contributions but to have a better workflow for reviewing and merging PRs.
The documentation is in practice managed as a separate project with its own contributors and reviewers. There is no official "documentation core team" currently. the doc workflow is still looking like the left side of the image, but with Ryan on top as lead of the documentation project rather than Fabien.

Given that the last commits of Ryan in core are 11 months ago and 2 years ago and he is not an active reviewer of PRs, it is logical that he is not added as a member of the core development team (he probably does not have enough time to become involved as a core member anyway given the time required by the doc project).
What could be done however (this is just a wild guess from me, not an official statement at all) is creating a core team for the documentation as well, allowing some other people to merge as well to help Ryan (@WouterJ looking like the first candidate for such a team)

#7
Christophe & Pablo, Ryan & I have considered our workflow when the doc community got bigger and in fact, we already follow the left picture (with great people like @xabbuh, @bicpi, @cordoval, @stof & some core people), except from the "mergers" level, mainly due to the fact that Ryan is the only very-active native doc guy.

1:- Why there is not any proper document which explain how symfony2 support with MongoDB.I am working on a application which is using Symfony2 & MongoDB. But i could not find any way how we use complex queries(Joins) with this.Even there not any doc whic given any example that how to use OR AND operators in FindBy query.

2: Every one is saying that use repository but no one gave any complete document how to use that repo to use our custom queries.

3: For support if i am searching for MongoDB every one is giving answer in reference of Mysql.Why is,t there a solution with Mongodb.

Please help me.
I m quit frustrated now with this Frame work.