Warning: You are browsing the documentation for Symfony 3.0, which is no longer maintained.

Once the component installed, it automatically registers a PHPUnit event listener which in turn registers a PHP error handler called DeprecationErrorHandler. After running your PHPUnit tests, you will get a report similar to this one: 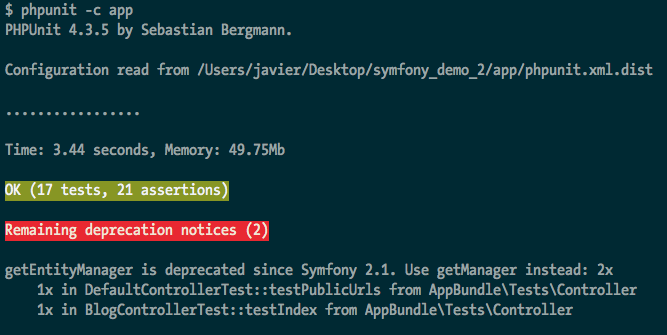 You used the Symfony Stopwatch Component to calculate the duration time of your process, here 10 seconds. However, depending on the load of the server your the processes running on your local machine, the $duration could for example be `10.000023s` instead of `10s`.

To use the ClockMock class in your test, you can:

As a result, the following is guarenteed to work and is no longer a transient test:

If this convention doesn't work for your application, you can also configure the mocked namespaces in the phpunit.xml file, as done for example in the HttpKernel Component: