The DebugFormatterHelper provides functions to output debug information when running an external program, for instance a process or HTTP request. For example, if you used it to output the results of running figlet symfony, it might output something like this: 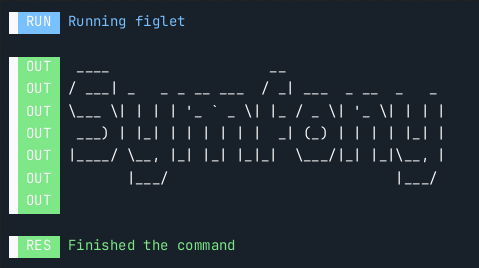 The formatter is included in the default helper set and you can get it by calling getHelper():

The formatter accepts strings and returns a formatted string, which you then output to the console (or even log the information or do anything else).

All methods of this helper have an identifier as the first argument. This is a unique value for each program. This way, the helper can debug information for multiple programs at the same time. When using the Process component, you probably want to use spl_object_hash.

This information is often too verbose to be shown by default. You can use verbosity levels to only show it when in debugging mode (-vvv).

As soon as you start a program, you can use start() to display information that the program is started:

You can tweak the prefix using the third argument:

Some programs give output while they are running. This information can be shown using progress():

In case of success, this will output:

And this in case of failure:

The fourth and fifth argument allow you to override the prefix for the normal output and error output respectively.

When a program is stopped, you can use stop() to notify this to the users:

In case of failure, this will be in red and in case of success it will be green.

As said before, you can also use the helper to display more programs at the same time. Information about different programs will be shown in different colors, to make it clear which output belongs to which command.