Making Decisions with a Workflow

Making Decisions with a Workflow

Having a state for a model is quite common. The comment state is only determined by the spam checker. What if we add more decision factors?

We might want to let the website admin moderate all comments after the spam checker. The process would be something along the lines of:

Implementing this logic is not too complex, but you can imagine that adding more rules would greatly increase the complexity. Instead of coding the logic ourselves, we can use the Symfony Workflow Component:

The comment workflow can be described in the config/packages/workflow.yaml file:

To validate the workflow, generate a visual representation: 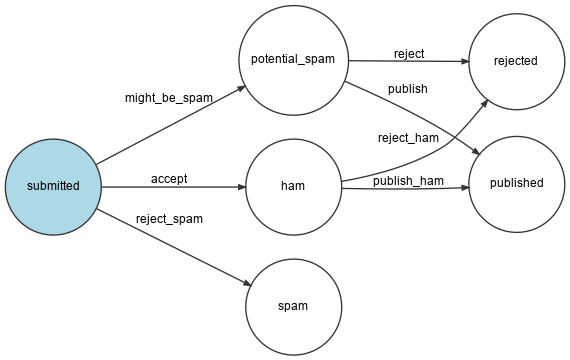 The dot command is a part of the Graphviz utility.

Replace the current logic in the message handler with the workflow:

The new logic reads as follows:

As we haven't implemented the admin validation, the next time the message is consumed, the "Dropping comment message" will be logged.

Let's implement an auto-validation until the next chapter:

Run symfony server:log and add a comment in the frontend to see all transitions happening one after the other.

We have just come across such an example with the injection of a WorkflowInterface in the previous section.

As we inject any instance of the generic WorkflowInterface interface in the contructor, how can Symfony guess which workflow implementation to use? Symfony uses a convention based on the argument name: $commentStateMachine refers to the comment workflow in the configuration (which type is state_machine). Try any other argument name and it will fail.

If you don't remember the convention, use the debug:container command. Search for all services containing "workflow":

We could have used the debug:autowiring command as seen in a previous chapter:

This work, including the code samples, is licensed under a Creative Commons BY-NC-SA 4.0 license.
We stand with Ukraine.
Version:
Locale:

This book is backed by:

see all backers
Search by Algolia